INTRODUCTION
Design studios at Pratt Institute produce lots of waste from crafts materials. These waste include paper, fabric, metal, clay, plastic, etc., mainly from architectural / design model making. The Pratt Givetake is an art supply recycling initiative, started in fall 2016 with an aim to provide students free materials that would otherwise be discarded. There are eight locations on Brooklyn Campus that accept donations. The Givetake centers record the weight of materials that students take for reuse.
These 8 locations do not include the studios on first floor interior design studios. One observation I have is that a considerable amount of large-size or reusable materials are commonly found in trash cans, where they could otherwise be donated to the Givetake center. I hypothesize that this problem is due to the inconvenience of disposing materials to the Givetake during its limited hours. The pathway to the Givetake was an unclear door in the back of an elevator, narrow and steep stairs leading the basement, where students often find the center closed. A solution is needed to make the donation process easier, simpler, and encouraging.
The end of the semester is when students throw away lots of materials and when the Givetake center could receive large amount of donation. Even if the materials are not eventually reused by students, they are still better off to be recycled properly than to end up in the landfill trash cans.
To make it easy, simple and encouraging for students to donate art supply to the Givetake, we propose marking noticeable ‘spaces’ that are dedicated for Givetake donation.
HYPOTHESIS
If having designated ‘spaces’ Givetake donation will increase the amount of art supply, then we will find an increase in the mass of materials received by the Givetake centers.
METHODOLOGY
1. Design the Givetake donation ‘space’ . (Please refer to the drawings in appendix)
2. Locations: PS 1st Floor and PS 3d Floor (please see images attached in the last page)
3. Data collection
a. Measurement: weight, photos
b. Sampling time: 4/29 - 5/02 once per day
c. Data from Givetake or Facility in the past for comparison.
TIMELINE
4/29 - Setup
4/29 - Day-1
4/30 - Day-2
5/01 - Day-3
5/02 - Day-3

SITE INITIAL DRAWINGS
(*Different from final setup. We changed the design according to what materials were available in the Givetake.)
Data Part 1: Materials Collected at Sites

Figure 2.​ Recycled Materials Weight as compared to 2017 Recycled Solid Waste Data (provided by Facility). The facility recorded the weight of recycled solid waste monthly. In April, Pratt Institute recycled a total of 62000 pounds of recycled solid waste. To compare our data to the record, we calculate a daily average from our data and times this number by 30 to get an estimated monthly average. Calculation: 629.4 / 4 * 30 = 944.1 (lb). Percentage: 944.1 / 62000 *100 = 1.523%
Data Part 2: Survey
Sample Size: 16
Participants’ Academic Majors: 7 in Interior Design, 2 in Architecture, 1 in Real Estate, 1 in Data Analysis , 1 in Industrial Design 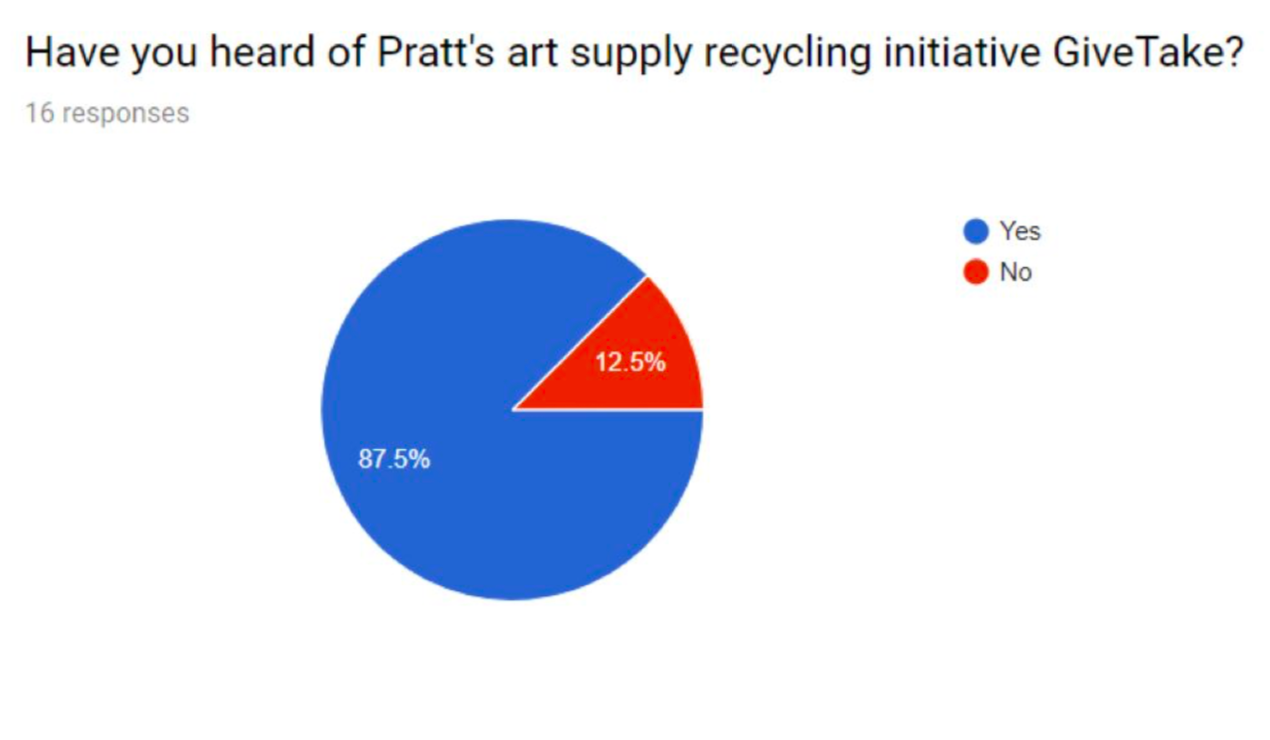 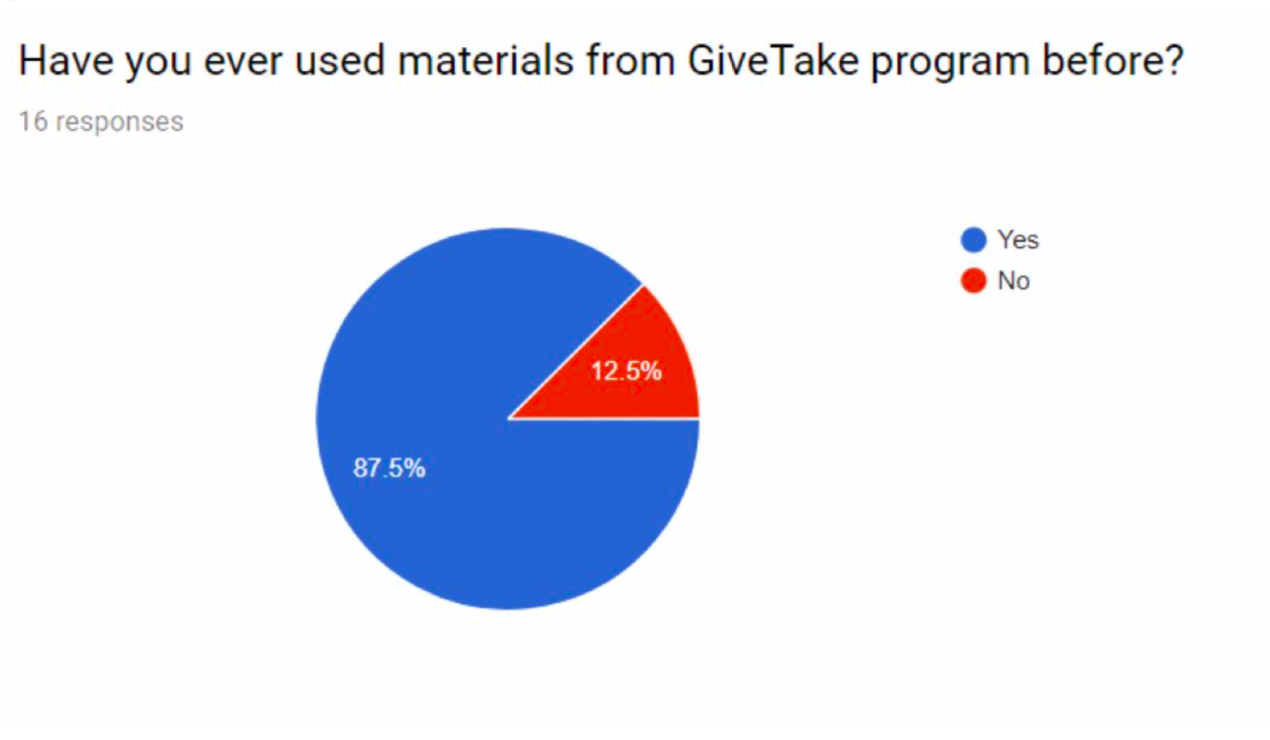 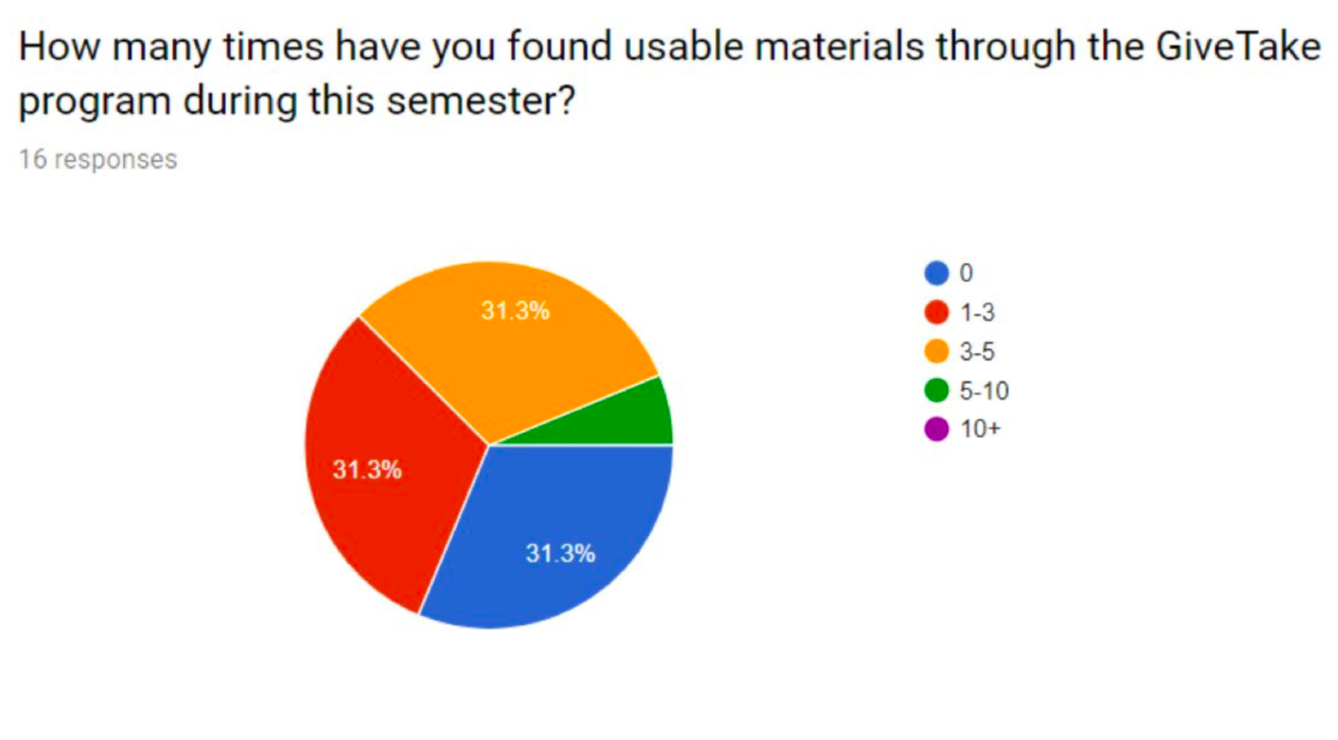 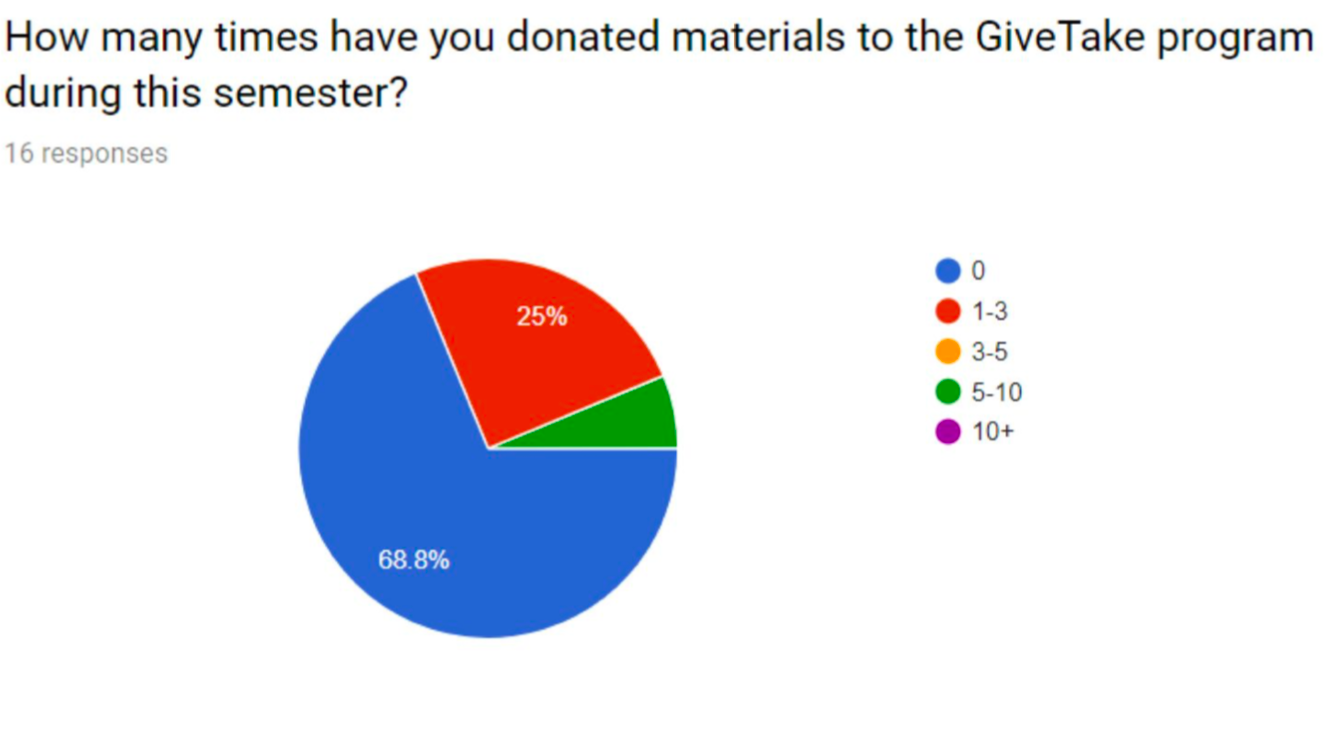 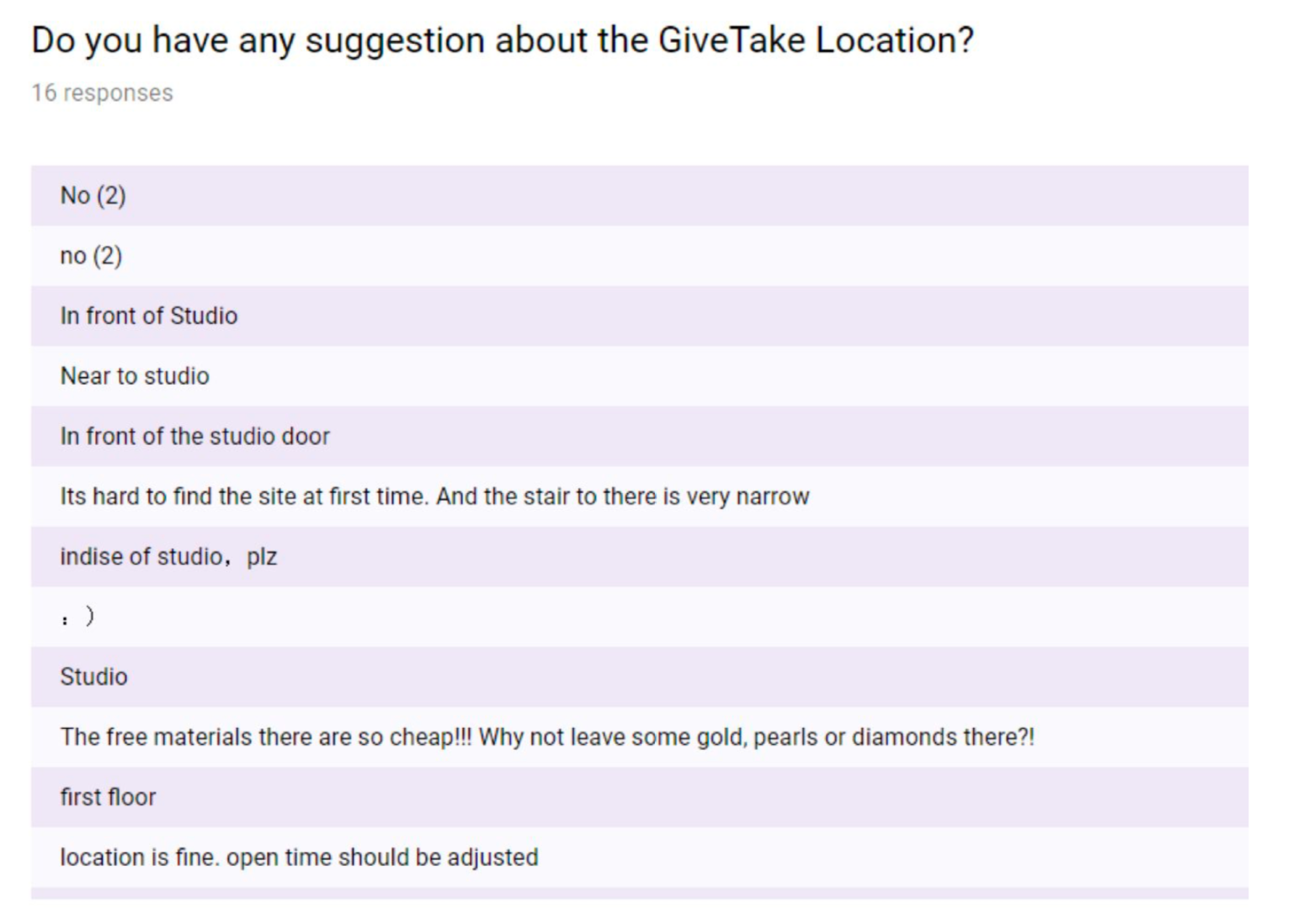 CONCLUSION
We were able to recycle a total of 629.4 lb of recycled art materials to the GiveTake Center using our two donation sites (T​able 1​). We were not able to conclude whether this was an increase in donation weight to the Givetake because we did not find donation record from the past to compare to. The Givetake center only records the weight of materials that students take out for reuse, not the weight of materials donated. We were, however, able to compare our data to the past monthly average total of recycled solid waste. The amount of waste we saved for the Givetake, estimating monthly, was 1.523% of the total recycled waste from Pratt Institute in April (​Figure 2)​ . We thought that this percentage could be even higher if we were able to prolong our study and collect materials during the cleanup period in the studios. This estimated percentage suggests a positive impact of having a Givetake designated donation area.
We found out that we the third floor location (PS3: total 562 lb ) received more than eight times more materials than the first floor location (PS1: total 67.4 lb) (F​igure 1​). Our survey data suggests this difference is due to the adjacency of the donation site to the studios. Most survey participants suggested that the Givetake location should be adjacent to or inside the studio. The PS3 is closer to the nearest studio than the PS1 location (​Table 2​). The PS3 location was right next to an Interior Design studio, it was also next to two elevators and the laser-cut lab, which made it a circulation hub. The PS1 location was at the end of the hallway, also in front of an elevator, but required the donator to walk a couple of steps from their studios.
The survey shows that almost 90% respondents heard of art supply recycling GiveTake before (Figure 3)​ , and all of them ever used the free materials from GiveTake center, average 3-5 times per semester. What surprised us is, only 25% respondents have ever donated their reusable materials to the GiveTake center
(F​igure 4​). The rest 75% student said they just put the reusable material to the trash can instead of donating to the GiveTake center. We thought one possible reason is that the Givetake center, located in the basement, is not conveniently accessible. One participant suggested that the hours of Givetake center (open only after 5 PM) “should be adjusted” (​Table 2)​ . Students take materials from the Givetake, and the amount of use varies by students (F​igure 5)​ , which means that the Givetake is beneficial to the students.
Overall we were able to gather a substantial amount of recycled art materials to the Givetake by using the two donation sites. By looking at both the measurement data and the survey result, we conclude that how much a donation site is successful depends on how close it is to the nearest studios. Having noticeable donation areas makes it easy and encouraging for students to giveaway art supply. One student came up to us, while we were collecting materials, and told us she wishes that could have more locations, including the one on the second floor outside her studios. This shows. This show the donation sites helped raise awareness to donate art supply. We think having areas designated for reusable material disposal is an excellent way to cut down waste and encourage reuse.
Many thanks to Center for Sustainable Design Strategies (CSDS) for collaboration, Tony Gelber at Facility for collaboration, Interior Design Department for support and our survey participants. 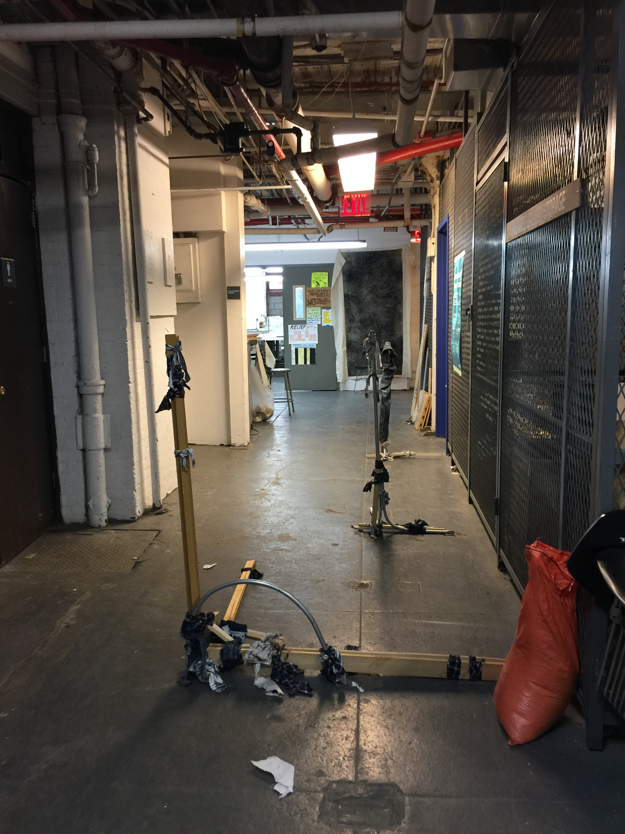 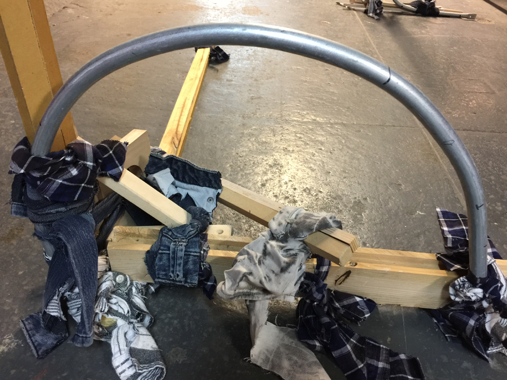 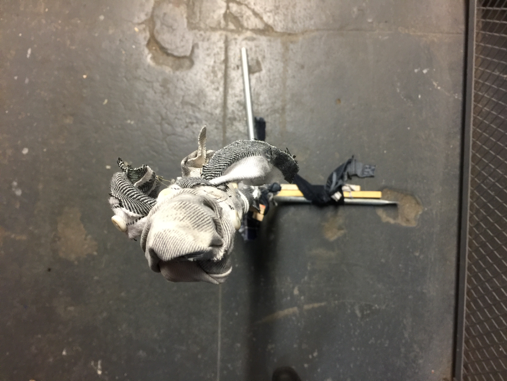 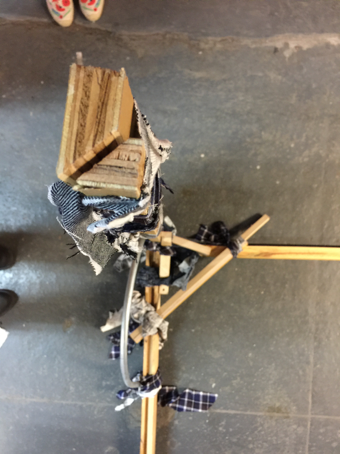